Zurich Cycling Routes, Cycling Discovery Days and a national Cycling Forum: with these and other accompanying measures, the Zurich 2024 Local Organising Committee will implement a wide range of cycling activities beyond the 2024 UCI Road and Para-cycling Road World Championships Zurich leaving them as a legacy for the public.

With their bid for the 2024 UCI Road and Para-cycling Road World Championships, the City and Canton of Zurich committed to the introduction of various accompanying measures. The Local Organising Committee (LOC) has taken on the task of developing these measures, the first of which will be implemented in Spring 2023. Others will follow over the year and a half leading up to the UCI World Championships in September 2024 and continue thereafter.

A boost for both competitive and recreational cycling

The supporting initiatives include projects to promote the sport of cycling, the use of bicycles in general and to showcase the region (for details see the fact sheet on accompanying measures). These measures will motivate, inspire, inform and initiate discussions related to cycling. With the national Cycling Forum, for example, an important congress is to be launched that combines national cycling topics from mobility to leisure. The newly designed Zurich Cycling Routes and the Zurich Cycling Challenge will motivate recreational cyclists to get on their bikes. A Roadshow will organise cycling festivals at various locations to get the public in the mood for the UCI World Championships. With the Cycling and Para-cycling Discovery Days, the LOC and its three governing entities, Swiss Cycling and the City and Canton of Zurich, are launching an important project to promote young talent, which will have an impact locally as well as regionally and nationally. The realisation of the “Trail Centre Zurich” as a pilot project should inspire other municipalities to follow suit.

Consolidation and reinforcement of existing strategies

The accompanying measures will combine and consolidate the existing strategies of the three governing entities in the areas of transport, mobility, environment, sports promotion, tourism and local promotion.

In order to reach these goals, the Zurich City Council has approved a contribution of 1,500,000 CHF. The Canton has also earmarked additional funding for activities and projects from various available sources including funds set aside for public benefit, bicycle traffic and sports. At the national level, the Federal government will provide 1,500,000 CHF to support the sports promotion projects of Swiss Cycling.

The measures were developed by Erwin Flury and Nathalie Schneitter, who joined the LOC Zurich 2024 in the summer of 2022 as Co-Project Leaders for Accompanying Measures and Sustainability. In the second half of 2022 the LOC, under the leadership of Daniel Rupf (General Project Manager) and Olivier Senn (Deputy General Project Manager and Head of Sports) was further strengthened with the recruitment of additional specialists from the cycling scene and other areas, including Gabriela Buchs and Adrien Merkt as Co-Project Leaders for Supporting Events. Tobias Fankhauser, the top handcyclist who retired a year ago, is Senior Manager responsible for para-cycling. The LOC project team is completed by Andreas Herren, Head of Communication, as well as staff from the Canton and City of Zurich, who coordinate the operational collaboration with the public sector.

The 2024 UCI Road and Para-cycling Road World Championships Zurich will be held in the Canton and City of Zurich from 21st -29th September 2024. The best 1300 riders, including para-cyclists, from more than 75 countries will take part in this major nine-day sporting event with global appeal. The UCI Road World Championships take place annually and are viewed by a worldwide audience of more than 300 million.

The programme, set up by Olivier Senn, LOC Deputy General Project Manager for the 2024 UCI Road and Para-Cycling Road World Championships in Zurich, Switzerland, also included visits to and updates on the planned race courses.

Conclusion after three constructive and productive days: #TOGETHER WE RIDE! 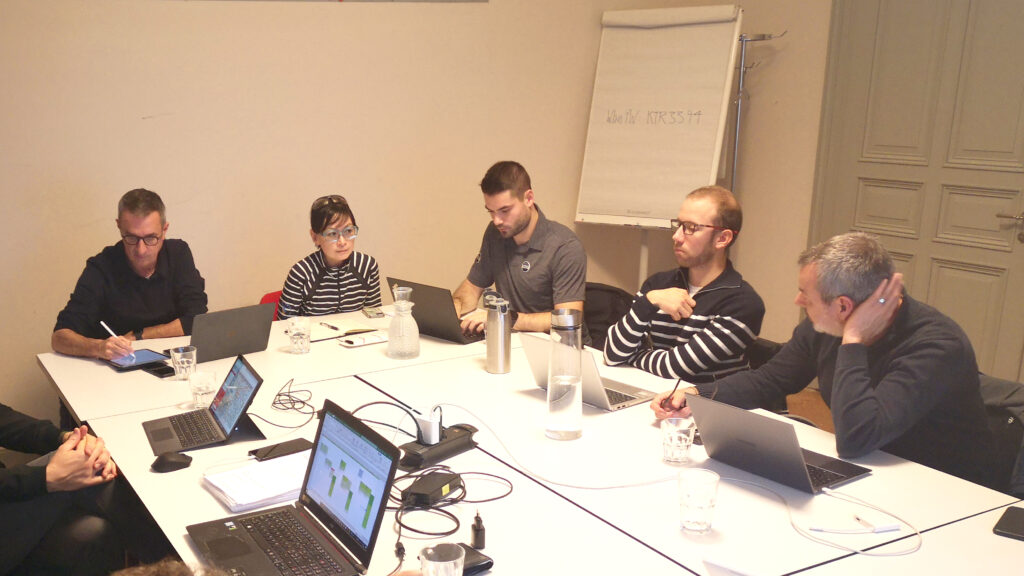 With just under two years before the big event the starting venues for the 2024 UCI Road and Para-Cycling Road World Championships Zurich have been decided: Following approval by the cities of Zurich and Uster, as well as the Municipality of Gossau, the City Council of Winterthur has also given the green light for the staging of the UCI Road World Championships. From the 21st to 29th September 2024 these four locations will be the starting points for more than 40 races covering diverse categories, including age and para-cycling sport classifications and divisions.

Subject to final approval by the UCI the races in Gossau will start on Laufenbachstrasse, in Uster on Zürichstrasse, while in Winterthur the starting gun will be fired in front of the Sulzer high-rise on Schützenstrasse. For the road races from Winterthur and Uster, start laps are also planned to take in the surrounding neighbourhoods. In Zurich the elite men will start their race against the clock at the history-steeped open air velodrome in Oerlikon. The para-athletes have a very special starting location: To satisfy the required course profiles, their races will start at the finish area at Sechseläutenplatz in Zurich.

Folk festivals and a host of other activities – “Together we ride”

As in Zurich, Winterthur, Uster and Gossau are also planning supporting programmes with folk festivals and other activities and events. At national level, Swiss Cycling has put together a comprehensive cycling event programme. The focus is “Sports and Health Promotion”, “Accident Prevention and Safety” and “Sustainable Mobility”. For its part, the Local Organising Committee LOC Zurich 2024 has been planning additional complementary events over the past few months, which are intended to last beyond the World Championships and planned to be presented in the coming weeks.

The UCI Road and Para-Cycling Road World Championships Zurich 2024 will be held in the Canton and City of Zurich from 21st to 29th September 2024. The top 1300 cyclists, including para-cyclists, representing over 75 countries will participate in this major nine-day sporting event with a global audience. The UCI Road World Championships are held annually and are watched by over 300 million TV viewers worldwide.

From Saturday, 21 September to Sunday, 29 September, the UCI Road and Para-cycling Road World Championships will cast their spell over the city and canton of Zurich. For the first time, the races of the para-cyclists are an integral part of the Road World Championships. The coveted rainbow jersey will be donned more than 40 times by the winners in various disciplines. Along the attractive and demanding routes, in the fan zones and in the epicentre Sechseläutenplatz one maxim will reign supremely: “TOGETHER WE RIDE”!

The nine-day programme includes time trials and road races for: Men Elite, Men U23, Men Junior, Women Elite-U23, Women Junior, Para-cycling Men (divided into different sport classes) and Para-cycling Women (divided into different sport classes). There will also be two mixed team events: a road team time trial mixed relay and a para-cycling mixed team relay. In addition, there will be amateur and popular races. Information on all these and other activities will be published continuously on the official website www.zurich2024.com.

A big novelty is that the men’s and women’s para-cycling road competitions are fully integrated for the first time. Among other things, it is planned to start the UCI World Championships with the Para-cycling Mixed Team Relay as part of the opening ceremony, featuring both men and women. The official logo of the UCI Road and Para-cycling Road World Championships embodies integration and inclusion, merging the four elements ZH (short for Zurich), 24, bicycle and handbike in combination with the UCI rainbow colours in a stylised way.

For UCI President David Lappartient, Zurich 2024 will provide an excellent showcase for road and para-cycling: “Bringing these two UCI World Championships together means we will enjoy nine days of non-stop action in and around Zurich. Multiple rainbow jerseys of UCI World Champion will be up for grabs, providing spectators with a festival of racing at the very highest level.

They will be able to witness the fastest road cyclists – able bodied and para-cyclists – in one incredible event that will highlight the best the discipline has to offer.”

The City and Canton of Zurich see the inclusion of the UCI Para-cycling Road World Championships as an ideal opportunity to make the social inclusion and integration of people with disabilities visible in a high-profile sporting event and to increase people’s awareness of the incredible physical capacity of these athletes.

Zurich 2024 will not have to fear comparison with the great cycling classics. The course profiles will give the races a distinctive character and give the rollers as well as the climbers the opportunity to prove their skills, endurance and tactical sense.

The open-air track arena and the Bellevue in Zurich as well as Winterthur, Uster and Gossau are planned as starting locations. For the road races from Winterthur and Uster, start laps are planned in the nearby surroundings. The approach routes to the final laps vary in length depending on the race and categories and bring the UCI World Championship racing atmosphere to 40 communities. Under the motto “The races are to come to the people”, the courses will lead through scenic highlights such as the Pfannenstil and the Weinland, the popular cycling area at Lake Greifensee and then along part of the right bank of Lake Zurich as well as through Zurich city centre. The final circuits, which have to be ridden several times, increase the sporting challenge for the riders and allow the spectators to experience the duels of the cycling giants up close.

As part of the bid, the city and canton of Zurich proposed routes for the various categories and races to the UCI. For some time now, cycling experts, traffic and safety specialists and other experts have been examining possible routes for their suitability according to sporting, traffic and marketing criteria. Parallel to the planning of the race routes, specialists from the city and canton as well as representatives of public transport companies and blue-light organisations are developing the necessary traffic concepts.

The UCI Road and Para-cycling Road World Championships will “come alive” on attractive courses in Zurich and its surroundings, while an attractively located public festival and easily accessible fan zones will offer the national and local population as well as fans from abroad a varied mix of competitions, entertainment and innovations around the theme of cycling.

Swiss Cycling, the Canton of Zurich and the City of Zurich as founding members of the organising association, have set themselves the goal of holding the UCI Road and Para-cycling Road World Championships as a sustainable major sporting event, as Urs Schmidig, President of the association, stated: “With various accompanying measures and the supporting programme, we want to create a lasting sporting and social added value beyond this major international competition. This event offers Zurich the opportunity to strengthen existing strategies and initiatives in the areas of transport, mobility, environment, inclusion, sports promotion as well as tourism and location marketing.”

The municipal council of the city of Zurich has already approved an amount of 1,500,000 Swiss francs for various accompanying measures. The cantonal government has also promised additional funds for such activities and projects from the cantonal non-profit fund and the sports fund. The city and the canton of Zurich have also approved contributions of 6.3 million Swiss francs and 3 million Swiss francs respectively (contributions and foregone revenue) for the organisation of the 2024 UCI Road and Para-cycling Road World Championships. The federal government will provide financial support for the event as well.

About the 2024 UCI Road and Para-cycling Road World Championships, Zurich

The 2024 UCI Road and Para-cycling Road World Championships Zurich will be held in the canton and city of Zurich from 21-29 September 2024. The best 1,300 riders, including para-cyclists, from more than 75 countries will take part in the nine-day global sporting event.

Swiss Cycling and the Canton and City of Zurich are the founding members of the association tasked with the hosting of the event. The Local Organising Committee (LOC) under the leadership of Daniel Rupf (overall project manager) and Olivier Senn (deputy overall project manager and head of sport) will be in charge of the planning and actual organisation.